If you can’t get through the Applicant Tracking System, then it’s all over. It is common knowledge that these systems review your uploaded document and follow technical algorithms to determine whether your application will be accepted or rejected.

Have you been KO’d by the ATS?
(KO – Knocked Out. Originally from the boxing arena and now used in the hiring community.)

Jobseekers, who genuinely believe they can do an excellent job to meet a company’s needs, find the ATS to be a source of enormous frustration. Their desire to talk to a flesh-and-blood human being is blocked by changing technology that has built a wall of separation between them and their future career growth and income.

There is more to these systems than meets the eye. In the early stages, key-words were believed to be the primary reason a candidate was not considered for a position. Key words are an important filter when a document is being analyzed by the ATS and I will discuss this in greater depth in a later blog.

Before the ATS can “look” at keywords, it has to be able to open the document. So I’m starting with the file extension.

ATS Document Extensions —does it matter?

We all know that there are several extensions available for upload in an ATS. And today, many options exist for jobseekers. Microsoft Word is an obvious choice; however, some businesses and individuals have begun using Google Docs exclusively. Then there is the PDF document. Add Open Office to the list.

Regardless of preference or philosophy, and like-it-or-not, Microsoft Word has become the industry standard for word processing. Although most applications, such as Open Office, Google Docs, Adobe Reader and Preview allow the user to “save as” a Microsoft Word document, the results vary considerably at best.

The document type is critical to an ATS.

In 2007, Microsoft Word moved to the “docx” extension. Since then, there have been multiple service packs. These updates are sometimes recognized as “SP2” and “SP3” and so forth.

Critical question: every time Microsoft came out with an upgrade, did all the ATS developers run out and make sure the application was still reading the documents effectively? You probably know the answer to this question. No. They didn’t run out, test documents, compare results and ensure documents were accurately parsed.

When saving a document from .doc to .docx, or vice versa, a message pops up to alert the user of the change. The message also indicates that some features may be lost when transitioning from one format to another.

Consequently, I developed a cover letter and résumé model that avoided those “features” that might cause issues so the Forward Motion document could be easily read without anomalies, regardless of the ATS.

Recently, Indeed.com has prevented users from uploading documents with .doc extensions —requiring instead the .docx. Many (most!) ATS software has not denied upload extensions with .doc. Unless the .doc extension is specifically denied, I prefer to use it. After tracking hundreds of document uploads, I believe that .doc is more accurately read by the system.

Many of the online interfaces will indicate that the system will accept any of the following extensions:

From a purely technical standpoint, it makes sense, however, I am not convinced that these extensions are treated with the same effectiveness by the ATS. I continue to test and re-test extension types with the Applicant Tracking Systems.

We are currently in a transition mode and I believe that .doc extension will eventually be eliminated.

Should you upload a PDF to an ATS?

A very few systems will indicate PDF “preferred.” That is rare. All PDFs are not created equal. I mean that literally. 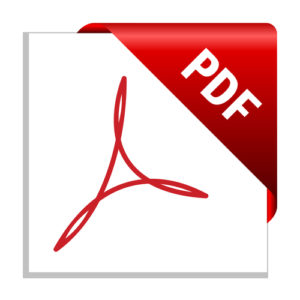 A PDF created by a scanner may result in an image of the entire page. You can tell if that happens because it isn’t possible to select text. The entire page is selected rather than a paragraph or sentence. If that is the case, then the document is unreadable by the ATS. Essentially, the jobseeker is uploading blank paper.

Another concern with PDF documents is the document size. Applicant Tracking Systems limit the size of an upload.

One year, a client added an image of her signature. The image size was large enough to prevent her from uploading the document.

After checking several ATS User Guides, I have found that the default size for a PDF is only 150 KB. That isn’t very big! Most companies don’t change the defaults when the ATS is implemented and that restriction on PDF document file size remains in place.

I’ve recently written an article on font styles and sizes. You can access it from Marcia’s Top Secrets. You will be asked for your email address. Don’t worry, we’ll take good care of it!

Next week, I will write a blog that takes deeper dive on the issue of “Key Words.” Once again, there’s more to it than meets the eye.

All this focus on the ATS. Have you noticed that companies are hiring fewer and fewer employees and moving to contract-based employment or sub-contractors? Yes, we are moving to a “Gig-Economy.”
You can read more about it here. 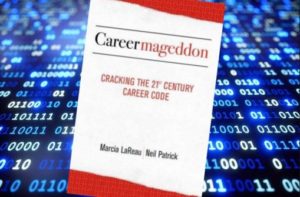 The Gig Economy is coming quickly! That’s why Neil Patrick and I wrote
Careermageddon.

Part 1 presents the Six Engines of Change and tells you what you need to know so you can read the jobs market and stay ahead of the curve.

Part 2 outlines a process to re-evaluate your skills as changes occur and establish your credibility with potential employers.

I hope you get the book. I hope you read it and embrace these changes so you and your family can enjoy the revenue you need and a future that is bright.