With the changes in the job market over the last ten years and the entrance of Gen Y into the employment scene, I am working with people from every conceivable background, industry, role, and from every age group. The youngest person I’ve worked with was in the 8th grade. His father, a former client, asked me to have a conversation with his son, who so anxious about his future (after high school and college) that he was almost consumed with fear. The oldest person I’ve worked with has been in her early 70s and had uncompromising determination. And then there is everyone in between.

The top concern that everyone (with very rare exception), is concerned about is this: the workplace culture. They don’t want to work in a toxic workplace. Those people who have worked for a decade or two have usually experienced at least one toxic workplace. The clients and others that I talk to, who have worked for more than 20 years can usually choose several stories from a host of bad experiences.

Now I’m working with early-career clients (32 years old and younger…i.e. Gen Y) and the stories they tell me, not only raise my eyebrows, but at times I am ashamed and embarrassed at the treatment they have received.

There are two exceptions.

The first deals with people who find unemployment a place of extreme anxiety. They will take just about any job that comes their way regardless of the situation. This has been the case with only one client in eleven years. He accepted the first job offer he received even though it could not possibly meet his needs. He ended up declaring bankruptcy within two years.

The second exception is admirable. In his words, “I will do anything to feed my family. I will clean toilets, stables, or anything else, if it will put food on our table.”

One in particular represents this group of people. He was a senior executive in a top national media company. You would recognize his voice if you listen to the radio. In his early sixty’s, he mowed lawns, distributed mulch, moved dirt, painted houses, and shoveled sidewalks and roofs in the winter. This individual and others like him have been my heroes throughout the years.

Complaints about the “Millennials”

This generation has received more than their fair share of criticism regarding their seeming desire for flexibility and other amenities in the workplace. I’ve written about this for the last four months. If you have any question about where I stand, please consider some of those blogs. I warn you that I am an unabashed champion of this early-career generation. (And don’t mess with me on this…I like where I stand on their behalf and I’m not going to change my mind.)

Yet, these former generations (Gen X, and Boomers), have had the same concerns.

Truly, there is no “rite of passage” that requires an American worker to go through a dreadful work experience before they graduate to “something better.”

Does anyone else see an irony in this?

Doesn’t it seem incredibly ironic that the hiring communities place so much weight on “fit?” What about all the focus on “culture?” And don’t forget the emails that so many jobseekers receive that goes something like:

“Thank you for your interest in ________. After careful consideration, we have identified other candidates who more closely align with our requirements.”

…and by that they mean the culture. 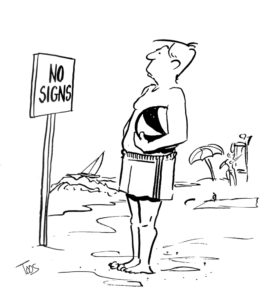 A former client in a role that managed over 200 union and non-union workers was told, “Really, I could find someone out there on the sidewalk who do a better job that you are doing.”

(Can anyone tell me how that particular response could be in any way helpful?)

Again, no surprise, that Millennials consistently tell me they don’t want to work in a toxic environment. They’ve heard stories from parents, friend’s parents, aunts, uncles, and others about working in a toxic environment. And now they are hearing the same from their peers and they are experiencing it firsthand. It still isn’t right and perhaps if we didn’t put up with it, companies would change.

It’s easy to blame HR when a work environment is challenging. But don’t be hasty in that decision. Human Resource professionals are, more often than not, caught between the proverbial rock and a hard place. They are pressured by management to get the very best candidates at the least possible price. They are rarely given the funding needed to accomplish the mandates that are passed on to them.

They are the first place to blame when a new hire doesn’t work out. And if the business isn’t doing as well as projected, then it’s because HR didn’t hire the right people!

In other words, HR is in the very same boat as everyone else. The culture of a company comes from the executive leadership.

A new way to check out a potential work environment

I’ve written on this topic before and the blogs cited below are still a good start. I am reminded of the standard tools such as glassdoor.com and LinkedIn.com, where you can look up company ratings as well as the CEO. Indeed.com also has company reviews which are a help.

However, in addition, I have added another use of LinkedIn to my clients’ list of checking out a company and it is this:
If you’ve been active on LinkedIn and you have a credible number of connections, then you may be able to find individuals that have, in their past worked at the company that you are considering.

I’m not looking for current employees. That gets awkward. I am looking for former employees: individuals who have nothing to lose by being honest and open about their experience. Oftentimes, these individuals can be identified through groups on LinkedIn.

Our experience shows that three out of 10 people will respond and have a candid conversation about the company culture. It’s a bit of work to find people who will have that “virtual cup of coffee,” but I think it’s worth it.

Job Security: Vet the company—will it be toxic?

Is the C-Suite the new sweat-shop? …And why it matters to you! – Part 1

Is the C-Suite the new sweat-shop? …And why it matters to you! —Part 2