It’s an important question! There’s a lot of talk about Millennials and I’m always amazed that there is very little agreement on the age range of this generation.

The term was coined in 1991 by Neil Howe and William Strauss, in their book “Generations: The History of America’s Future, 1584 to 2069.” Synonyms include Gen Y, Generation Y and Generation iY (a book by Tim Elmore).

Other sources show remarkable confusion as to when the millennial generation began and when Generation Z started. Here’s the lineup:

WOW… again, a generation has traditionally been about 20 years (Why is that? …stay with me.). These dates show a seven-year variance with USA Today beginning with 1977 and the Bureau of Labor Statistics showing 1985. This is BIG!

How can we know when generations begin and end?

Actually, it’s easy. When one generation begins having children, the next generation has begun. Do you get it? It isn’t about who fought in wars (The GI generation or the Silent Generation), or if there were an overwhelming number of births (Boomers –although this is closer to the truth). It isn’t about changing attitudes, or how much technology has been a part of their lives. It’s biology!

So here’s the rundown…WARNING: there’s a catch.

When the Baby Boomers began having children, they were also about 20 years old and that started the next generation: Generation X (1965 – 1985).

Generation X followed suit and began having children when they were about 20 years old as well. That would have been 1985. So 1985 was the year that GenY began.

Generation Y, according to the Bureau of Labor Statistics, began in 1985 and began having children in 2010. Therefore Generation Z began in 2010.

Did you catch the catch?
When did Generation Z begin? 2010! Generation Y is 25 years in length whereas the previous generations were 20 years. That means that GenY has waited five years longer to have children. They didn’t begin having children when they were 20 years old. They waited five more years. There are many reasons for this, which is the topic of a future blog.

Here’s a graphic from Ken Gronbach’s book: The Age Curve: How to Profit from the Coming Economic Storm. The information here is generated through the Bureau of Labor Statistics website. 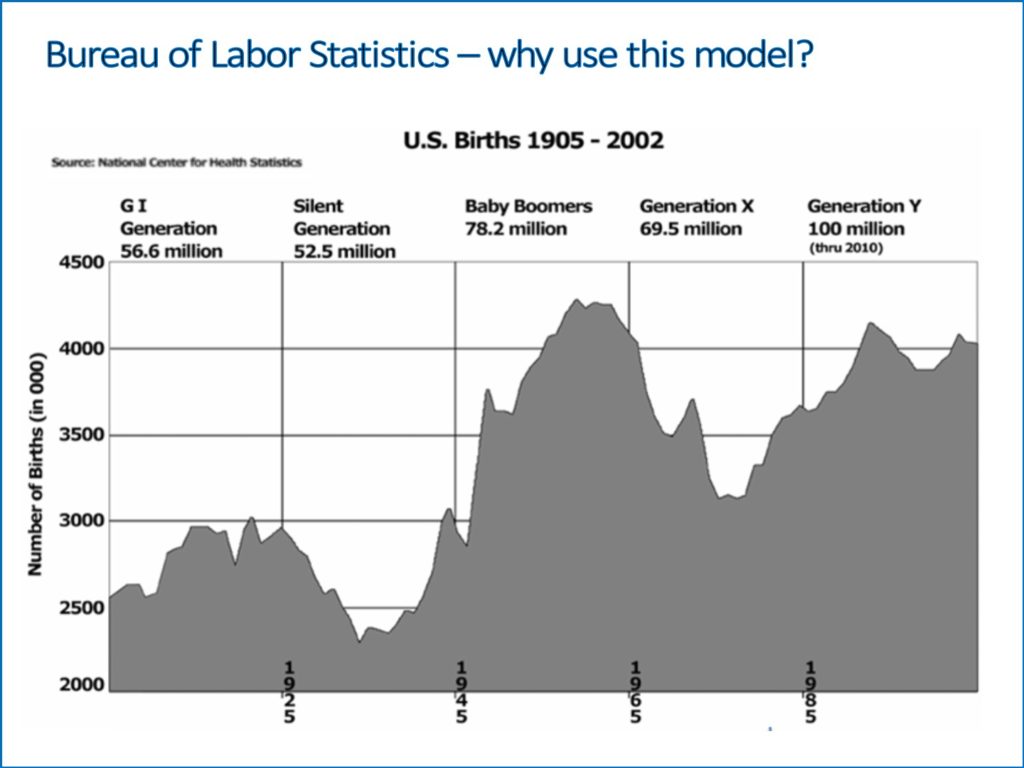 How Old are the Millennials today…right now?

Here in the year 2017, according to the Bureau of Labor Statistics Model, Generation Y began in 1985 and Generation Z began in 2010. Therefore, the oldest GenY is (approximately) 32 years old. They youngest is seven (yes, 7) years old. 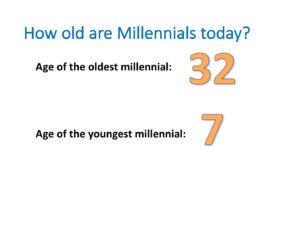 Who are the millennials?

I respect the need for different organizations to publish information that supports their presuppositions. In their defense, I will assume that they are trying to do the best they can with regard to accurate research (yes, that’s a presumption).

With the speed of media today, careful research rarely becomes a priority. I think it is reasonable to offer a bit of grace for those companies that have few resources to dedicate to accuracy. What amazes me, however, is when companies, like USA Today, PEW Research, and The Atlantic … all get it wrong and tout mere assumptions. They have truly broken trust with their readers…at least this one.

Why do we need to know the age of Millennials?

The reason we need to know the age of this generation becomes critical for the following reasons:

Wide generalizations are harmful. They erroneously characterize people! They get in the way of identifying the, often hidden, challenge and they obscure and eliminate potential solutions.

On May 26, 2013, Time Magazine published their front cover about the millennial generation, characterizing them as the “ME, ME, ME Generation”: 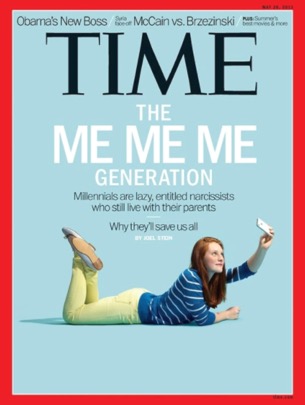 Despite the sub-caption: …”Why they’ll save us all”, I was so nauseated by the initial message that I bypassed reading the article on the grounds of poor research, inaccurate branding (of Millennials), and taking advantage of a struggling generation.

In the first place, at the time of printing, the oldest Millennial would have been 28 years old and the youngest would have been three years old. (I was happy to know that the 3-years olds were still living at home!)

I found the cover repugnant. Obviously, Time magazine isn’t interested in these individuals as potential readers. Perhaps other readers found it funny. I didn’t.

Why this rant is critical:

Generation Y, the millennials, are people. They are all different for different reasons. Applying a solution to one will likely not work with others. Employers are finding this out the hard way. Understanding this critical point is essential to the United States as we embrace, encourage and champion this early-career generation to help us move forward to a successful future.

Understanding who we are talking about is a first step to understanding our challenges and identifying innovative solutions. 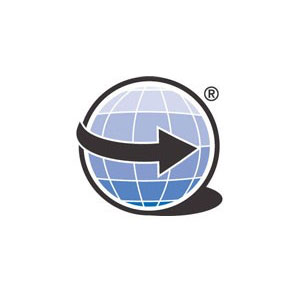 Master the Forward Motion jobseeker skills to differentiate yourself, and stay ahead of the curve.